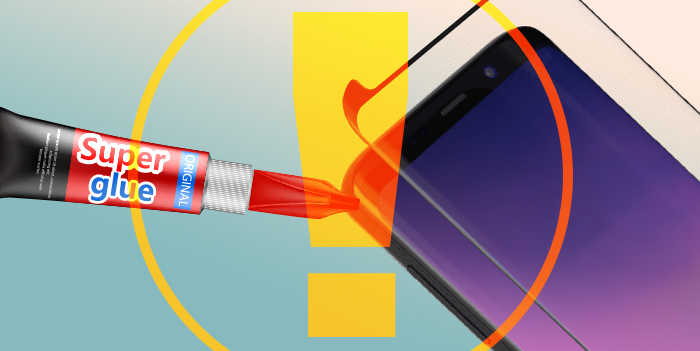 For every technological advancement there are unforeseen consequences, sometimes good and sometimes not so good. This is a rule across industries and across generations. When innovation requires refinement it can and usually does bring the best out of the brightest minds to find a solution. In the mobile space, attempts to innovate occur regularly, and certain residual issues take longer to solve than others. When manufacturers introduced curved screens it presented problems protective glass manufacturers are only starting to effectively come to terms with. But there has been progress.

We all likely have some measure of awareness regarding this issue and have passionately waited for the right solution. Luckily, our partners seemed to have solved the riddle and are offering full adhesive screen protection for Samsung Galaxy S9 and S9+ curved screens! Check out our initial offer here. As the Forbes piece indicates, full adhesive is the way to go, and as far as we are concerned, the only viable option until the next great innovation comes along to delight and disrupt our industry.

One last thing: it is on you and your staff to build awareness of this wonderful solution for curved screens. Just as we have some level of awareness of this issue, so do your customers. The stigma against screen protection for curved screens has been building for years, and the Forbes piece says as much. “It was such a major problem for the Samsung Galaxy S6 Edge (released in 2015) that one Google search for “tempered glass Galaxy” shows dozens and dozens of thread on forums ranging from Reddit to XDA warning users not to waste money on them.” So, while you sell, remember the difference and advantages between full adhesive vs. the partial adhesive glass previously on the market. Education will give you and your customers that break to stay ahead of the curve.

Welcome to Our Blog

Home to mobile accessory news and business insight for retailers. To learn more about VoiceComm and our services as a wholesale accessory distributor, visit myvoicecomm.com

Sign up to have new posts and updates delivered to your inbox.

Thank you for subscribing.

we respect your privacy and take protecting it seriously